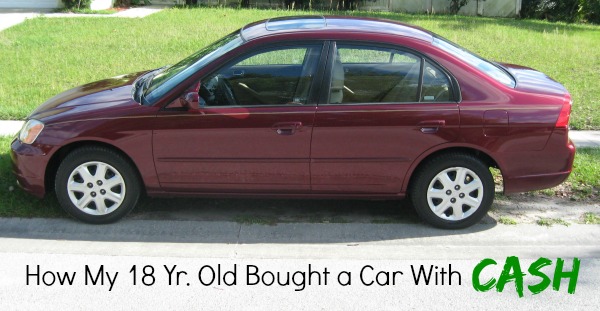 If you’ve been a parent longer than ten minutes then you know that parenting is difficult and things don’t always go as planned – like the time I took my newborn to visit Daddy at work but forgot the extra set of clothes. Needless to say Junior had a bodily discharge of ginormous proportions on the drive over and was subsequently introduced to everyone wearing nothing but a clean diaper and a blanket.

So we’ve all experienced parenting fails, but today I want to share a success story with you.

Last week my 18 year old son was able to purchase a new-to-him used car for $7000 cash! I don’t have to tell you that this is a proud moment for mom and dad.

Some of our friends asked us how he managed to do this, so today I’m sharing a few steps that we took as parents and what my son did to make this happen.

The Parental Part of the Deal

As I mentioned, we have had plenty of parental fails, but there are a few important things that we did to prepare our son for success.

We gave our children responsibilities starting at an early age.

I know that most of the time it is easier to simply take care of tasks rather than teaching our kids to do them, but we made the effort when our children were very young to teach them how to pick up their toys and clean their own rooms. As they grew we taught them how to make their own breakfast and lunch, and to do their own laundry.

We also had our children complete tasks like cleaning the bathrooms, washing the dishes and vacuuming just because they are a part of the family. We don’t pay our children to do these tasks because they will not be paid to do them as adults. We want them to learn the discipline of taking care of their space without any external reward.

Outside of these tasks, our children were allowed to complete extra jobs for money and once they were paid, they were encouraged to save some money, give some money and spend some money. We set up jars labeled “save”, “give” and “spend” to give them a visual reminder of where to place the money. We encouraged them to do the same with monetary gifts they received as well as money they earned.

When the child wanted to buy a toy or candy we had them check the spending money to see if they had enough. If not, they had to wait until they had earned more money.

We limited the amount of material gifts our children received.

One thing you learn early on (usually in the checkout line) is that kids want stuff. There is nothing inherently wrong with wanting toys, but how we handle our children’s desires can help them to become successful adults or it can create greediness and materialism.

While we gave our children many gifts just because we are their parents and we love them, we chose to use our children’s desire for material items as a learning opportunity to prepare them for the real world. We want to teach them the value of money and to help them realize that material goods come from hard work not wishing or asking someone else for them (a lesson some adults have yet to learn!)

As a result, we gave our children gifts for birthdays and Christmas and we let them give us “wish lists” but we set a budget amount on the lists and let them know what the budget was. If the child wanted an item outside of the budgeted amount, we encouraged them to find a way to make the extra money rather than just giving the money or expensive gift to them.

I realize that some parents see this as cruel and unusual punishment, and of course, as a parent you must use common sense. We did not have our 3 year old mow lawns to make money for his birthday present. We did, however, require our son at 11 years old to earn the money to buy an expensive game system he wanted rather than buying it for him.

We made life uncomfortable.

In the book Boundaries, Dr. Henry Cloud writes that healthy relationships are made up of people who take responsibility for their own lives and that we need to allow other people’s problems to be their problems and not ours. Of course there is a place for helping those who cannot help themselves, but in parenting in particular we should not take care of our children’s responsibilities when they are fully capable of doing what needs to be done.

When my son graduated from high school last year and started his first job we were very excited. Part of our parenting him to maturity was  helping him to realize that transportation to work was HIS problem, not ours. As a result we charged him gas money when we transported him to and from work and my husband wisely showed him how to take the bus. When it was inconvenient for us to take him, he rode the bus even though it was over an hour ride.

The first time I put him on the bus, it took every bit of self control I could muster not to follow that bus and make sure that he got off of it, but I knew that I had to trust God with him and let him go so that he could grow up.

Making life a little less “cushy” provided the external motivation our son needed to save the money for a car so he would not have to take the bus to work.

My Son’s Part of the Deal

Once we had done all we could as parents, the ball was in our son’s court so to speak. He had to take some steps of his own to make his goal of owning a car a reality.

Before my son was ever paid for working he set up a savings account at a local credit union because they had better interest rates than local banks and no fees.

Saving money in a jar is great when your goal is a couple hundred dollars, but for several thousand dollars the bank seems like a safer alternative.

He decided on a budget.

When our son received his first paycheck, we sat down together and worked out a budget. At first he wanted to spend everything he made on entertainment like a new game system, but I encouraged him to set short-term and long-term goals and to restrict his entertainment spending to a small percentage of his pay. The teenage and young adult years are a prime time for saving because expenses are low and you can save a higher percentage of your income.

He chose to limit his miscellaneous spending

Because his primary goal was to save for a car, my son chose to limit his miscellaneous spending to $20 a week. He budgeted $25 a week toward a game system he wanted to buy and he saved the remainder of his paycheck for his car.

He had his money direct deposited to savings.

My son set up his paycheck to be direct deposited directly into savings and then manually transferred his spending money to his checking account. This meant that he had to feel the pain of actually taking the money from savings and made him less likely to spend more than he had budgeted. You could also use automatic withdrawal through your bank so that you don’t have to make any decisions. The money in your checking is what you have to spend.

He kept the goal in mind.

There were many times when friends were going out and my son was tempted to spend extra money, but he stuck to his budget because his desire for a car was greater than his desire to have temporary fun. (Of course, it didn’t hurt that he had to ride the bus a lot.)

Nine months later after saving almost 70% of his total income and looking around for a good deal he was able to buy a car for $7000 cash, which was less than the book value and it’s in great shape according to our mechanic. Woohoo!

So that’s our story and hopefully you are encouraged by it no matter where you are in your parenting (or your own finances). Setting a goal and working diligently toward it results in a big payoff in the end!

Have you had any recent parenting or financial success?

Share in the comments so we can celebrate with you! 🙂