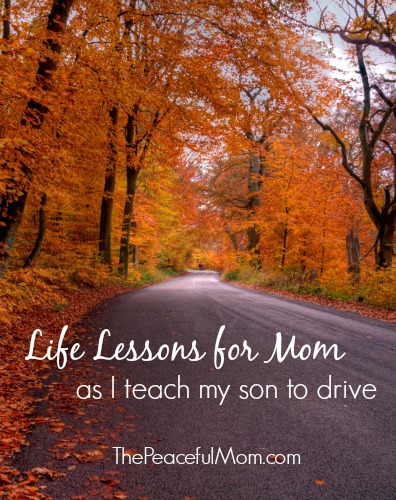 Purposeful Parenting--Making the most of the years of influence.

You may have seen in my Weekly Plan posts that I am teaching my son to drive. We have decided to take it slowly, making sure that he is as ready as possible to take the wheel by himself (after all I have heard that the male brain is not fully mature until age 25!).

One terrific benefit of these practice sessions is the special one-on-one time that we have enjoyed. It has resulted in some interesting conversations that I am sure would not have occurred with his three sisters around. 🙂 In the process I have not only learned more about my son and the process of teaching someone to drive, I have also learned a little more about parenting.

I have to pay attention.

I noticed that when we first started driving my son sometimes missed stop signs if they were in an area with a lot of other signage or shrubbery. Stop signs are pretty important when you are driving, but I had to train my son to pay attention and look for them.

In parenting, there are also signs or markers that I can easily miss if I don’t pay attention–like my son’s mention of a book he has started reading that has inspired him to work with homeless people. I can let this go, or I can take advantage of the opportunity and find ways for him to serve the homeless.

Sometimes I need to speed up.

I have been surprised by some aspects of the training process. I assumed that like any red blooded American teen male, my son would have a need for speed and that I would constantly be telling him to slow down. On the contrary, I often have to tell him to speed up (especially after turning onto a busy street in front of oncoming traffic!).

In parenting, there are times when I have become complacent and need to pick up the pace.  I need to be more active in seeking out conversations with my children (especially teenagers!). I need to spend more time individually with each child and I need to actively engage in relationship with my kids who are quickly changing.

It is so true that the time we have to influence our children is fleeting and we need to make the most of it.

I have to let go.

I realized a few months into the process that I needed to transition from telling my son what to do to allowing him to make his own decisions. He had to learn when to pull out into oncoming traffic and when to wait. As hair-raising as it is, he has to learn because I won’t always be in the car with him.

This transition perfectly mirrors the rest of life. Toddlers and young children have to be told what to do. As our children grow and mature, we should do less and less for them, and by the time they are teenagers they need to start making their own decisions so they can make mistakes while they are still under our care and protection. We need to work ourselves out of our jobs so to speak. I won’t always be with them, so I have to train my children to think and make decisions on their own.

I am so thankful for this opportunity to spend time with my son and train him for life. We might have to speed things up though, my 15 year old daughter is next!